If you’re like most other people, the last thing you look at before bed and the first thing you look at when you wake up is probably your mobile phone. According to IDC Research, 80 percent of smartphone users check their phone within the first 15 minutes of waking up in the morning. Statistically, that’s before most people even brush their teeth! Furthermore, a survey of 2,000 people found that most people check their phone 80 times per day, and they typically spend around four hours per day looking at their smartphone. Phones aren’t the only problem either. We look at screens of all shapes and sizes all day long, from our computers to our televisions. While phones, televisions and computers give us a lot of information and entertainment, all of that time spent looking at screens adds up and can have consequences for your eyes, thanks to blue light.

What is blue light?

On one end of the light spectrum are red light rays, which consist of longer wavelengths that have less energy. On the other end are blue light rays, which have the shortest wavelengths and the most energy. Blue light comes from our screens, but screens aren’t our only source of blue light. It’s all around us. In fact, the main source of blue light comes from the sun. The light from the sun has so much energy that it can even produce changes in our skin, which is what causes sunburns and tans.

If blue light is natural, how can it be problematic?

Blue light naturally comes from the sun, and our brains have evolved to naturally respond to that light. During the day, the exposure to blue light from the sun helps to increase your energy, levels, memory, attention, reaction time and even mood. The blue light sends a signal to the brain that it’s time to be awake and attentive, and when the blue light is gone when the sun sets, it signals to the brain that it’s time to rest.

The problem with surrounding ourselves with screens all day every day is that all of those additional sources of blue light confuse the signals our brains are supposed to be sending to our bodies. If you’re exposed to blue light at night, it can actually hinder the release of melatonin, which is a hormone that regulates body rhythms and helps you get to sleep. It’s no wonder so many people have struggled with insomnia and other sleep problems with so many screens around.

How does blue light affect your eyes? 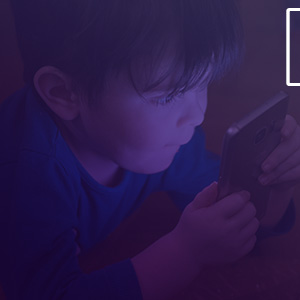 Through years of research, we know that overexposure to ultraviolet rays can increase the risk of developing eye disease, such as cancer, growths on the eye and cataracts, but the effects of blue light are still being researched. However, we do know that blue light contributes to digital eye strain, and preliminary research has found that the changes caused by blue light resemble the changes caused by macular degeneration.

In our next blog, we’ll go over a few tips to help you prevent digital eye strain and protect your eyes and brain form the effects of blue light exposure. Stay tuned to learn more, and in the meantime, contact our optometrist in Colorado Springs with any questions or concerns.

We strive to provide complete care for our patients. Learn more about all the services we provide.

Click above to choose from our wide selection of designer frames!